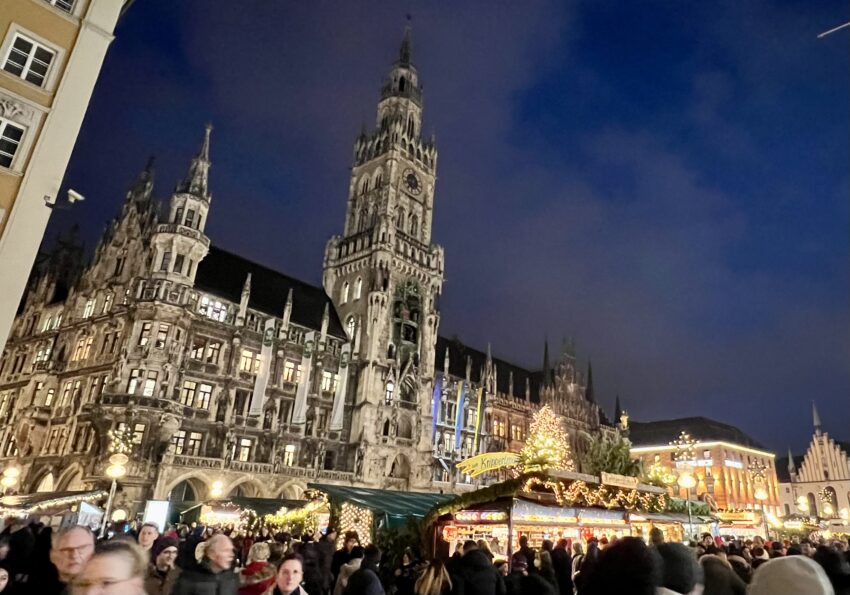 Nik and I wanted to get a fix of winter and cooler temps so we decided on a short trip to a few cities where we would visit several Christmas Markets. We settled on staying two nights in Munich, Germany, followed by a night in Salzburg, Austria and ending with one night in Vienna, Austria. In addition to checking out the Munich Christmas markets, we also explored a few historical sights and beer spots.

No Shortage of Munich Christmas Markets

The main Munich Christmas market is located in the  Marienplatz square of Old Town. It’s the biggest and most well-known of the markets in Munich, located in front of the beautiful, Gothic designed, town hall and spread out along some pedestrian side streets.

We took the 15 minute train ride from our hotel and came up an escalator right into the square. It was an absolutely beautiful setting. Stalls of vendors with crafts, sweets and other wares were lined everywhere and it was pretty busy for being late afternoon on a Thursday.

Nik and I strolled around to get a feel of what was available. We started off with warm wine drinks, that neither of us are big fans of. The most popular beverage is Glühwein, also known as spiced mulled wine. I had a hot rosé and Nik had a warm apple and gin punch.

We paired our drinks with some delicious meats on rolls. It’s what we have been craving for awhile, and the ones we had did not disappoint.

Nearby was Frauenkirche, also called The Munich Cathedral, another Gothic designed looking church with two towers. In front of the cathedral, along a stretch of the market was a matching vendor booth. It was a mini replica of the cathedral and just very cool.

A short walk from Marienplatz is Rindermarkt, one of the oldest streets in Munich and home to a very nice Christmas market. Much smaller than Marienplatz, it still had some delicious food options and a few vendor craft stalls. The centerpiece of the area is its the Christmas pyramid, a kind of carousel demonstrating nativity scenes.

One stand that I read about was Flammlachs which is known for their roasted salmon options.

I had the most delicious salmon sandwich in the freshest bun with a little mayo. Other food options of theirs included a couple choices of soup and a platter with a baked potato. The salmon sandwich was so good, I still can’t stop talking about it.

The area is also known for the Ruffinihaus, a group of three houses that date back to the 1700s. The buildings were damaged during World War II and have gone through some rebuilding and renovations starting in the 1970s.

Not far from Rindermarkt is the Sendlinger Tor Christmas market. It’s location is the site of one of the few remaining gates from the medieval city walls. This market was also the smallest we saw. Not many food or drink vendors but a good amount of crafts available.

We didn’t stay long and headed back to the area by Marienplatz where I ate an order of latkes (potato pancakes) with a side of apple sauce. A little feel of Chanukah at the Christmas market! They were very good, even though they were a tad too greasy.

Our second day of markets began in The English Garden, one of the city’s largest parks, at the Chinese Tower Market. It opened at noon and we arrived shortly after opening time. Not many vendors were open yet and it really wasn’t that charming of a space. I can only assume (and hope) it gets lively at night with the lights and more of crowd.

The last Christmas Market in Munich that we made our way to was the Haidhausen Christmas Market on Weissenburger Platz. This little gem of a neighborhood market ended up being super cute. Really well decorated with a nice mix of food, drink and craft vendors. It wasn’t too busy because it was still early afternoon. There were two booths that were set up across from each other that had a Santa on wire going back and forth between the two.

While in Munich we took the opportunity to check out a couple small memorials to important Nazi Resistance movements during the Second World War.  Munich was where the Nazi movement began and was consider a stronghold when the Nazis took power in Germany in 1933.

The White Rose was a non-violent, intellectual resistance group in Nazi Germany which was led by five students at the University of Munich. They started an anonymously distributing leafless and graffiti throughout Munich calling for active resistance to the Nazi regime.  The students had worked as medical orderlies for a period of time on the Eastern Front and witnessed many atrocities that had driven them to action when they returned to school.

The students began publishing leaflets in the fall of 1942 calling out the insanity of the war and demanding resistance of any kind.  After publishing and distributing multiple leaflets over a course of months, Sophie and Hans Scholls (brother and sister) were arrested distributing leaflets in the main building of the University of Munich.  As they were taken away by the gestapo, Sophie Scholls tossed the remaining leaflets in the air which is represented in the memorial plaques scattered outside the university building where they were arrested.  The members of the resistance group were all tried and executed.

Georg Elser was a man whom in 1939 took it upon himself to assassinate Hitler along with the rest of the Nazi leadership during a rally at the Bürgerbräukeller beer hall in Munich.  Elser spent several nights hallowing out a pillar behind the speakers podium in the beer hall and then installed a homemade time bomb set to go off during Hitler’s annual speech commemorating his failed 1923 coup.  At the last minute the scheduled speech was moved an hour forward and instead of the normal two hours it was delivered in an hour.  This led to Hitler ending his speech 13 minutes before the bomb detonated.  This considered by many the closest any assassination attempt on Hitler ever came to success.

The plaque that commemorates the location of the pillar at the beer hall reads:

At this place on November 8th, 1939 in the former Burgerbraukeller, an attack on Adolf Hitler was attempt by the carpenter Johann Georg Elser.

He wanted to put the terror regime of the National Socialists to an end.

Other Munich Beer and Food

We did expand our horizons beyond just the Christmas markets. We ended one night at the Hofbräuhaus München, which was cool. But I don’t think we got the full rowdy experience because it was the end of the night and not all the tables were full. We tried to go earlier in the evening and there was a long line outside of people waiting to get in.

A similar beer hall on a much smaller scale was the Paulaner Bräuhaus. They were gearing up for a private event so some of their table space wasn’t available. When we got sat, we were the only ones in the room, but then it slowly filled in and we had a delicious lunch of weiner schnitzel and a few beers.

Nik did some searching and found a stretch of craft beer bars not far from Paulaner. We were already a 15 minute train ride outside of city center, so it was nice to walk around and explore other areas.

For the Chicagoans who read this blog, Hop Dog reminded us of Kuma’s Corner. Loud heavy music, a specialty of hot dogs as opposed to hamburgers. There were about 12 beers on draft and a few others in cans. The bartender was very friendly and it was a good spot to have a few drinks at. Highly recommend checking Hop Dog out.  Also, there were a couple old ladies there playing boardgames.

A short walk from Hop Dog led us to True Brew Brewing Company. A nice amount of beers on draft. As soon as we walked in we got a whiff of their pizzas and “calzones.”

We decided to order their meatball calzone, and it was delicious. The perfect light dinner because we had a late lunch. The two guys working had so-so personalities. The space was otherwise very nice and we’d recommend making a stop there.

Possibly our favorite spot along our craft beer crawl was Frisches Bier. The bartender was incredibly nice and chatty with us. Huge draft list and a small food menu, if you were hungry.

They had a few shots listed on a chalk board so we asked about them. One was called a Mexicana, or something of the sort. It was basically a Bloody Mary shot. I had one and it was delicious. Nik had a shot of mint schnapps, which he really liked.

That’s a Wrap on Munich

We really enjoyed our two days covering a bunch of Munich Christmas Markets and some historical culture. The weather was cold and had some snowfall, which made for a nice backdrop.

Stay tuned for our report from Salzburg as we headed there by train from Munich!