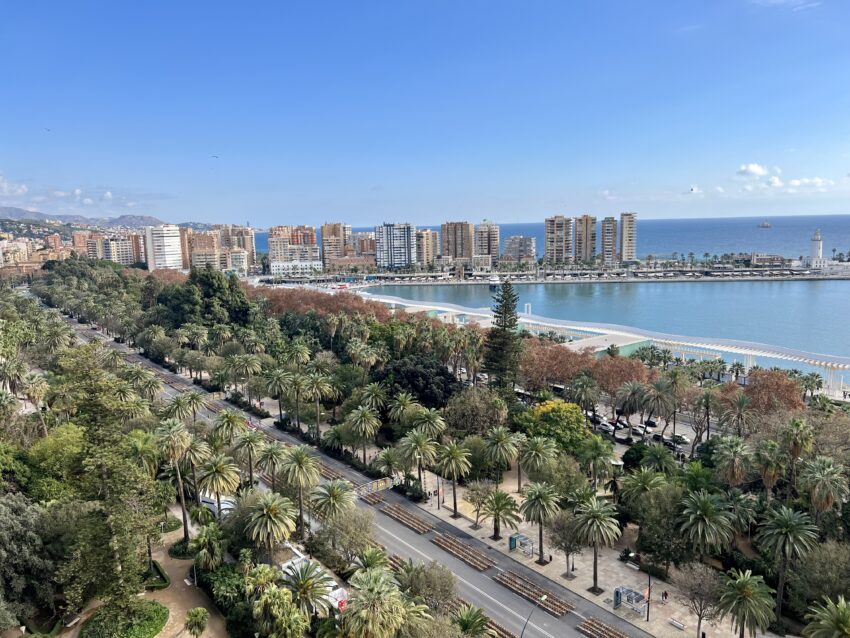 Sometime in the spring or summer of 2021, through Facebook, I became friendly with another woman who was moving from the United States to Spain with her husband and their dog. Though they were moving to Southern Spain, to a city called Malaga, we stayed in touch and became friendly. Nik and I haven’t had a chance yet to explore much of Southern Spain. With a gap between trips I made a solo trip to spend 48 hours in Malaga to meet my friend Brooke and her husband Kevin.

While Malaga is typically warmer than Barcelona because of its southern location along the coast, I think I brought some cooler temps with me. It was sunny each day I was there but in the low-60s. It ended up being fine because the lower temp was more comfortable for all of the walking I did.

One of the main landmarks of the city is the Malaga Cathedral. Located in the historic center, it’s a building you see from many vantage points and is absolutely stunning inside and out. A combo ticket to see the inside of the cathedral and access to the rooftop was 12€ (there is a discount for residents.)

The cathedral was built between 1528 and 1782 and its original plans called for two towers. Due to a lack of funds only the north tower was completed. The South tower is unfinished, though you can see some of the columns.

The interior sculptures, chapels and choir are quite beautiful. The choir space is highlighted by two giant organs, one on each side. After spending time walking around inside we headed outside to the garden where we would begin the climb to the roof.

Our first stop to the roof was an outside terrace which really only provided views of the cathedral exterior. We wondered if this was as high as we were going because no one ever told us we were taking a break as we went upstairs.

Luckily we proceeded up another stairwell to the very top and the views were amazing. Every direction you looked, you saw a different part of the city.

A short walk from the Malaga Cathedral is the Roman theater of Malaga. It sits at the foot of the famous Alcazaba fortress. The theatre was built in the first century BC and over time it became buried under dirt and rubble. It remained there for almost five centuries until it was rediscovered in 1951.

After several decades of excavation and other work, the site opened to the public in the 2000s.

La Alcazaba is one of Malaga’s most important landmarks. It is one of two Moorish fortresses in the city, the other being the Castillo (Castle) de Gibralfaro, situated above (a joint ticket to visit the Alcazaba and the castle costs 5.50€).

The word Alcazaba comes from Arabic ‘AL-qasbah’ and refers to a fortification within a walled town. My pictures don’t do it justice. The fortress walls seem endless, and you follow a cobblestone path to the top with some great views along the way.

There were also QR codes throughout that provided audio guides telling you about the various parts of the fortress as you walked around.

Though the Gibralfaro Castle sits above the Alcazaba on a high hill overlooking Malaga city and port, you cannot get to it from within. You have to walk back down, exit the Alcazaba and then walk up another incline, that follows the fortress’s outer wall and takes about 20 minutes to get to the top. Once again there are some lovely views along the walk.

The castle was built in the 14th century to house troops and protect the Alcazaba. Nik and I recently walked around Santa Bárbara Castle in Alicante and it was a little different than the Gibralfaro Castle. Santa Bárbara Castle seemed to have more internal walls still standing. Gibralfaro mostly had a “wall-walkway” around the perimeter that you had access to. 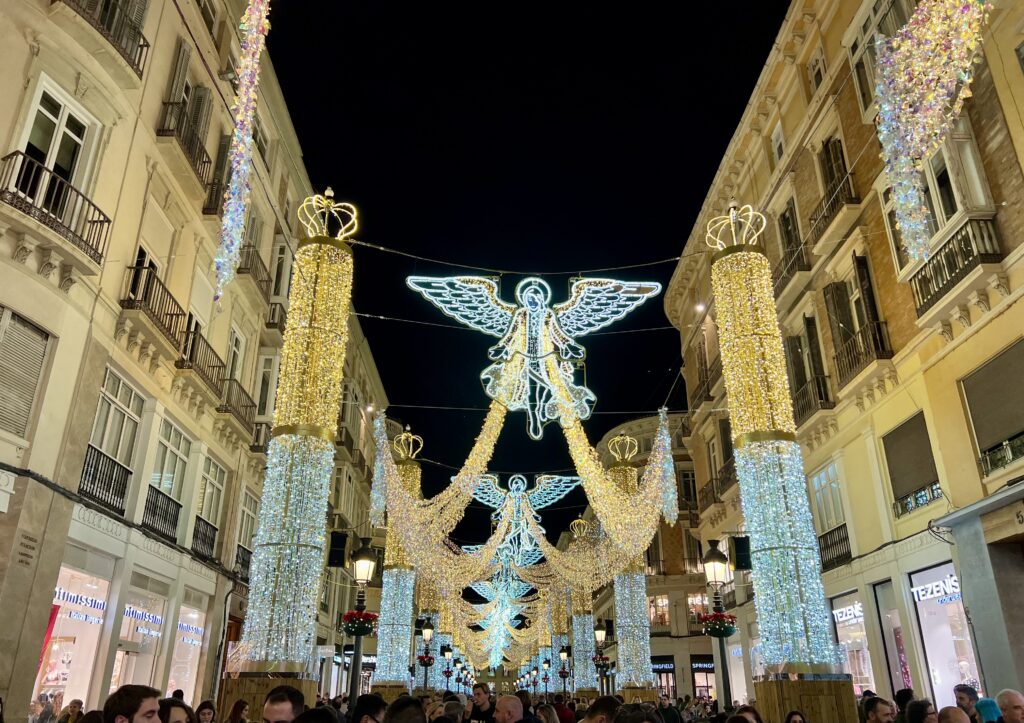 Calle Larios is a famous pedestrian and shopping street. For the Christmas season, the street is turned into a beautiful winter wonderland with an amazing sound and light show:

During the course of several songs, the lights dance to the rhythm of the music. The show repeats itself a couple times a night and lasts 15-20 minutes and it is the place to be. The spectacle is something that locals and visitors look forward to. It helped that my hotel was a very short walk away and we got there in time to see the presentation start. It was very impressive.

Not quite a sightseeing thing, but I happened to be visiting over the Three Kings Holiday, which is a big deal across Spain. Malaga’s Three Kings parade was on my second night there. The main street through the city was closed and chairs lined a few blocks. Four of us staked out a spot to stand along one of the bridges.

A procession of floats, musicians and other entertainers slowly made their way through the streets throwing candy. Kids, and adults alike, loved trying to grab some. It’s said that 20,500 kilos (45,900 lbs) of sweets would be tossed. I was a fan of the jellies.

An architectural gem in the city is the Atarazanas Market. It’s deep in the hustle and bustle of a few busy city streets and you could easily miss it. The main archway entrance and eye-catching stained glass window are the highlights of this market.

Interesting about its history is that it was originally a shipyard. Later it was used as a barracks and military hospital before the market got installed in the 19th century.

If you know me, I love visiting new markets and eating at them if there are restaurant stands. After a quick walk through I found Bar Atarazanas where I initially ordered and enjoyed some sautéed shrimp and clams. While eating, numerous people kept coming up and ordering a small portion of paella and it looked good, so of course I had to get some too. All three food items and a beer came to 24€ which I didn’t think was too bad. 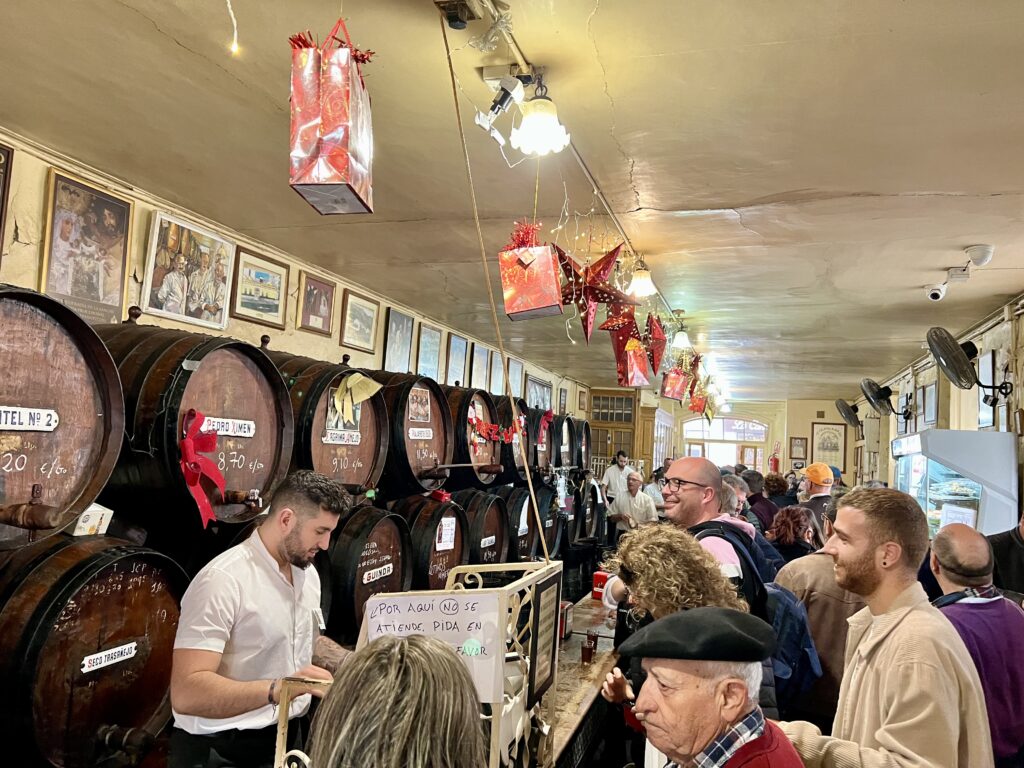 Antigua Casa de Guardia is one of the oldest wine bars in the city. No stools, just the bar table itself. Behind the bar are stacked barrels of wine and vermouth. We each had a small wine and while sweet, it was still pretty tasty.

No shortage of tapas spots in Malaga and we found ourselves at Casa Lola that serves a mix of tapas and pinchos. The three of us shared a variety and they were very good. Everything was made to order.

A Little of Everything

The morning that I explored the Alcazaba and castle, I started with a hearty breakfast at BYOKO. Egg Benedict on toast and a fresh chai latte.

It was also my understanding that a visit to Malaga had to include churros from Casa Aranda. No need to twist my arm, I’ll eat churros any time. These were a little thicker and bigger than ones I’ve had in Madrid and Barcelona.

Brooke and Kevin introduced me to KGB, a hip looking tapas spot. The three of us stopped in on my first day and I sampled the bravas. I made a return visit the next day for lunch and again had the bravas. They call them “Patatas Bravas Divorciadas.” Bravas topped half and half with two different style sauces. Both sauces were delicious. One had a little spicey kick and the other more of a smokey flavor. I also had their oxtail burger with havarati cheese, arugula and mayo. It was slightly bigger than a slider and so good.

I also made a stop at Nusa Cocktail Bar that’s on a terrace overlooking the port. I want to return in the spring or summer and do some serious yacht watching.

Not pictured, but eaten on this trip, was a dulce de leche ice cream cone from Casa Mira. They’re considered the oldest ice cream shop in the city and have a few locations. Worth a visit and treating yourself to something sweet.

As Nik and I are still partial to Marriott properties, I got a room at the AC Hotel by Marriott Malaga Palacio, one of the best located hotels in Malaga. It’s 15 stories tall, which is rare for the area, and overlooks Paseo del Parque, the main street of the area, and the port. The hotel is highlighted by one of the best rooftop bars in the city, as pictured above.

My room had a balcony with some sweet views and I was also left a welcome gift: mini bottle of local wine and a tin of local cookies.

The roof provided a great view of the Cathedral, which was nearby. And views of the Alcazaba and castle off in the distance:

The hotel was also still decorated for Christmas. Almost a little too over the top for me:

Overall, it was a great 48 hours in Malaga. It was nice to finally meet Brooke and Kevin. I’m excited to keep in touch with them, especially as we follow each others adventures while living abroad.