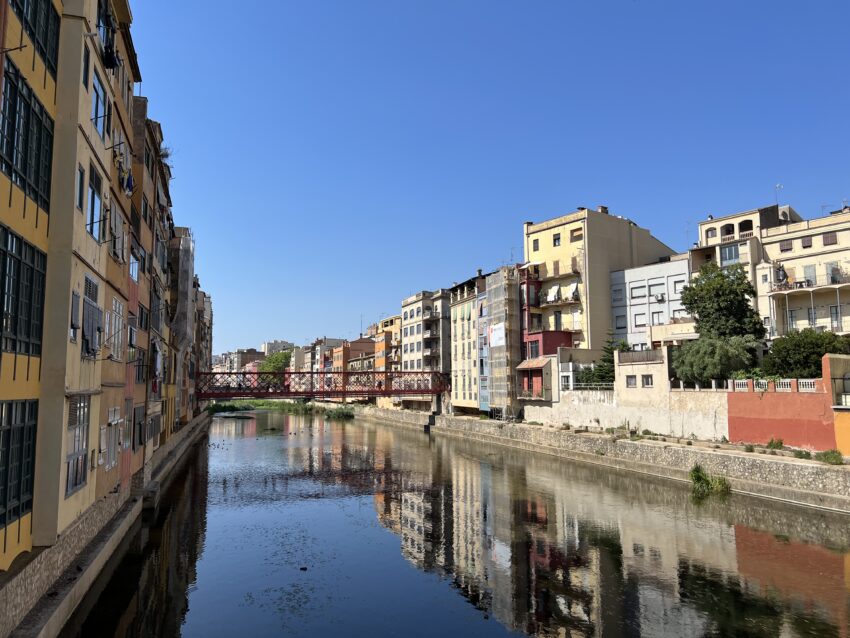 It only took approximately four months but Nik and I finally took a tour to Girona and Costa Brava. It was a small-group tour through In Out Barcelona Tours and was a great way to get a taste of the area.

Costa Brava is a coastal region of Catalonia in northeastern Spain stretching from the town of Blanes, northeast of Barcelona, to the French border and includes the city of Girona.

The small group tour was limited to eight people and picked us up at our apartment. We hopped in a very comfortable air conditioned van and hit the road for a roughly 90 minute drive to our first stop, Girona.

Our guide Mat, led us through the old part of Girona that has been very well preserved. Old town consists most notably of a few landmark spots: the Girona Cathedral, a Jewish Quarter, old city walls that date back to Roman times and more. The mix of gothic and ancient architecture throughout the area was beautiful.

The Girona Cathedral and Game of Thrones

I never watched Game of Thrones, but Nik did. Girona was used as a film location for much of season six of the HBO series and fans have flocked to the area to see some of the sights. Most recognizable is probably the Girona Cathedral, which you can read more about the filming here. As you compare to the picture further above, CGI was used to edit the area, but for the most part you can recognize the cathedral.

Related: Check out the first Game of Thrones site we visited in 2019

The old city walls date back to the Roman times to protect the city from invaders and was an important military fortification back in the day. Over time the walls have degraded but a portion has been preserved and remain accessible to walk along. The walls also provide a beautiful view of the city.

After getting our steps in walking around the old town, we had some free time. It was recommended to get ice cream at Rocambolesc, so that’s what we did. Most of the ice cream spots in Barcelona are gelato and this place was true dairy ice cream. They had a variety of toppings including cotton candy. My cone was delicious:

The Village of Pals

Our next stop on the Girona and Costa Brava tour was a medieval village named Pals. The town sits on a hill and is highlighted by the restored St. Peter’s Church.

The village is also known for its rice cultivation and a liquor called Ratafia, a brandy-based liqueur that’s a mixture of fresh walnuts, herbs, fruits and spices. We sampled Ratafia and it was good, but not my preferred type of booze.

After Pals it was finally time for lunch and a stop at the beach in the nearby town of Calella. The whole group had a nice lunch together at Restaurante la Vela. Following a day of lots of walking and tons of sun, the beach was the perfect way to end the tour before heading back to Barcelona.

We had about 90 minutes to spend at the beach or walk around the town, as Nik chose to do the latter.

All in all, it was a great day trip to get a taste of Girona and Costa Brava. We will definitely take another trip to Girona to further explore the city.